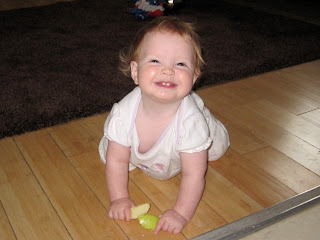 It's been way too long, and the longer it gets, the worse it feels. Posting, I am talking about, of course.
SO much has happened over the past two months and I had so much to talk about and now, where did it all go.
In my queue for posts at a later date - which I hope will come:
And much much more...  ( I know, exciting isn't it?)

But back to the subject of the post: Isobel's last two months and the march ever forward to her first birthday!
There have been some huge strides forward. Mostly in engagement with the world, understanding of words and how things work, and crawling towards standing and maybe soon walking. Teething did not happen practically the whole month of August when we were in the UK. Which was good for everybody. But more teeth are in and on their way. She now has three visible top and bottom. And more coming in.
She surprised us all with her first non mama word - cat!
We were reading her a book about a black cat ( similar to ours ) called Slinky Malinky, and she pointed to the cat in the book and said, "cat", three times while pointing at the cat. That was followed by endless exclamations of the word  at all times of the day and night. Now she usually reserves it for when there is a cat in the vicinity. Next words were "toes" - as in, "where's Isobel's toes?" a game her cousin Murray and her auntie Chayley  we liked to play with her. Since then she has said "down" - as in "get down" and "go". This is all to her other mom's credit, because she talks to her a lot and is always looking for teaching moments. Me, I tend to be much more  of a quiet companion for Isobel. Good job there are two of us, or Isobel may have never uttered a word. Oh and the  other day she said "hi" to a passer by in the street.
In motor skills news, she is a fantastic and avid crawler and now loves to stand up, pull herself up, get in corners that she has no business to be in and crawl under chairs and tables. She crawled under a big heavy chair at the hospital the other day when I had an appointment and had to be rescued. It hasn't deterred her from more exploring.
When we were in the UK we discovered a childrens  TV series called "In the Night G.arden",  which is like the Telly Tubbies but a lot better, and she got really interested in it, especially as a bedtime ritual. Now she knows all the songs ( it's very repetitive, which is good) and claps and wiggles and dances when Makka Pakka's song comes on. If you haven't checked it out, google it. There is even an "In the Night Garde.n" app for the I Pad and phone.
The biggest highlight of the trip for me was Isobel's equanimity at all the traveling. She didn't mind being pulled in and out of the carrier so we could go through security, she made lots of friends along the way, and she loved being on the train and standing up on the seat while I held her so she could look out of the window. The Er.go carrier was an absolute lifesaver and helped her to take naps when we were on the go, and helped me keep her close and secure when we were changing trains, or walking t the store, or in the park. She never christened her little surfer dude suit that we got her for "swimming" in the sea, but she did have a ball on the beach, crawling and throwing sand and eating it as well.
She makes all kinds of sounds as she explores her verbal ability and one of these is clicking with her mouth, which we refer to as her  African Clicking Language.
Oh and the kicker - tonight she picked up the TV remote, pointed it at the TV and turned it on. She looked back at her mommy to show how pleased she was with herself. Classic!
Okay it's late and I am wiped, so here is a link to our September pictures: http://www.flickr.com/photos/cybersue/sets/72157627576601465/
Posted by tireegal68 at 8:56 PM 13 comments: 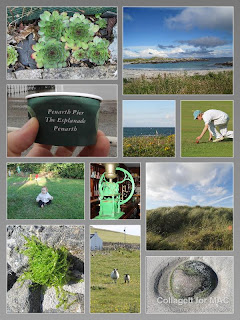 Here are our green photos - taken mostly on our holiday in August in England, Scotland and Wales. When I say we, I really mean we. Susan is the mastermind behind these photos. I mostly nag her to take them and to download them and to make them into a collage. I should have said this before. I have taken some of the pictures on these posts, but most of the credit should go to Susan.